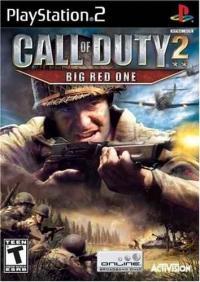 Call of Duty 2: Big Red One

World War II has called you to duty to fight for your country. With the harsh realities of death and despair sinking in you must prevail. Nothing must stop you from victory not even the sight or smell of death. As part of America's most decorated and heroic fighting unit The Big Red One you'll work together with your squad mates to accomplish highly dangerous combat missions spanning North Africa Italy and Nazi-occupied Western Europe. You'll be forced to destroy the lives of your enemies while building new relationships with your squad members. The realities of life pull you in every direction but nothing can stop the First Division. Incredible cinematic intensity creates a true-to-life gameplay experience. You'll battle on land sea and in the air experiencing blistering desert heat and the deadly countryside of Europe. War has torn the world apart and artillery explosions shake the ground you walk upon. Safety exists nowhere. With the aid of more than three dozen authentic weapons you must keep moving forward regardless of the casualties. Bound together trough the chaos of battle your squad is all that you have left. Through all-new artificial intelligence and animation your allies (and enemies) have gotten smarter. You'll need to effectively make use of environmental cover and tactical maneuvers such as flanking envelopment and fire-and-maneuver behaviors if you wish to survive the hazards of war.